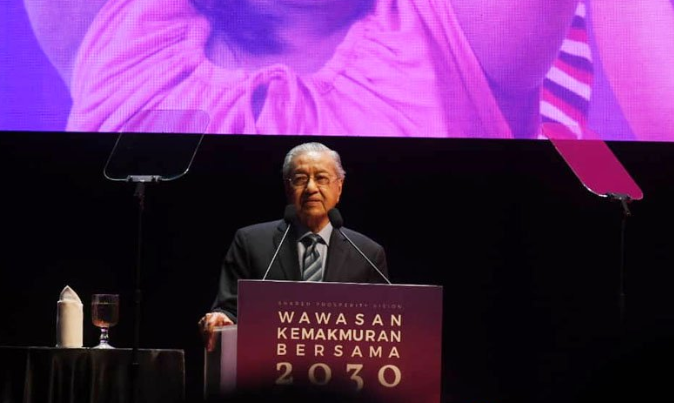 Mahathir said SPV 2030 will be fullly implemented from 2021.

“In 2021, we will hit the ground running and pursue the Shared Prosperity Vision full steam,” he said at the launch at KLCC this morning.

SPV 2030, he said, aimed at achieving fairer economic growth and adding value to the economy, making Malaysia attractive once more to foreign investors.

Mahathir said the global economy had changed much over the years and while Malaysia had successfully transformed from an agricultural to industrial nation, it was now time for the next step.

Sadly, he said the economic development direction in the past decade, which saw premature liberalisation, the pursuit of gross domestic product (GDP) values and a high-income nation, had turned the country into a low-value economy with a high reliance on cheap and low-skilled labour.

He said this was proven when more than 60% of the jobs created in the past decade were low-skilled with an average salary of less than RM2,000.

“The effect of the economic structure in the past two decades actually widened inequality among the people, be it among income, ethnic and regional classes and even within the supply chain.

Mahathir also cited the growing inequality among Bumiputeras and non-Bumiputeras, urban and rural areas, and between East and West Malaysia.

So, Mahathir said, the Bumiputera equity target of 30% under the New Economic Policy has yet to be met.

Shared prosperity, he said, meant that no one was left behind and this included the Bumiputeras, who were lagging behind other communities.

“At the same time, as I always stress, the Bumiputeras should not just wait for the government’s help and support.

“When we understand we are left behind, we need to realise we need to run faster to chase those ahead of us.”

He called on the people to work towards realising the goals of SPV 2030.

Mahathir first announced SPV 2030 a few months ago but until today, there have been few details.

The objectives of the 10-year roadmap, from 2021 to 2030, are to ensure development for all, address wealth and income disparities and build a united, prosperous and dignified nation.

Among its key targets is for Malaysia to attain a RM3.4 trillion gross domestic product (GDP), employee wages to be at 48% of GDP, an equal salary median among the races and a Gini Coeficient of 0. 34, down from 0.39 in 2016.

Each of these thrusts has its own targets like SME and microbusinesses contributing to 50% of GDP, the building of new sectors like renewable energy, and Islamic Finance Hub 2.0.

It also targets 60% of SPM leavers to pursue TVET, a discrimination-free labour market, the measuring of poverty using a relative poverty index, and the introduction of a religious harmony index, among others.

On top of that, SPV 2030 also outlines specific KEGAs for each state, including being logistics or financial hubs, eco tourism and heritage tourism, manufacturing or agriculture.